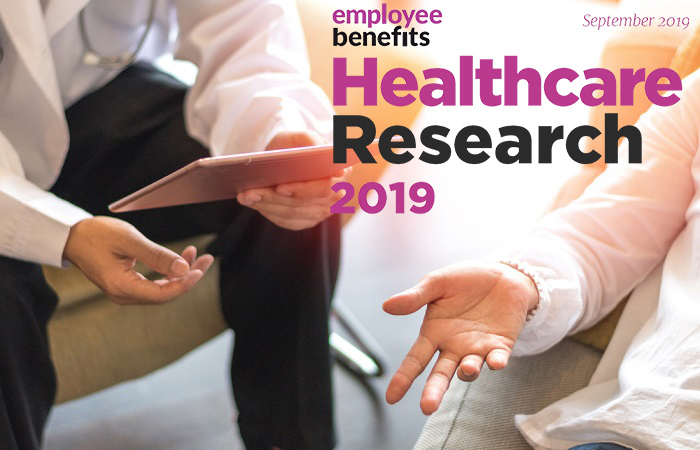 EXCLUSIVE: Support and counselling services remain the most popular type of healthcare benefit in 2019, with seven in 10 (71%) employers offering something in this category. This type of benefit has remained in the top spot for three consecutive years, according to research by Employee Benefits.

The Employee Benefits/Health Shield Healthcare research 2019, which surveyed 202 HR decision makers and influencers, also found that, when drilling down into the specific benefits being offered by organisations, employee assistance programmes (EAPs) are by far the most common overall, offered by 93% of respondents on a core basis, which is a considerable improvement on the 43% that did so when this research was conducted in 2013.

Meanwhile, stress counselling, such as cognitive behavioural therapy (CBT), is provided by 43%, more than doubling since 2007, when this stood at 21%. Other types of debt, legal or family counselling are made available as a core benefit by 31% of respondents. These have also risen in popularity by nine percentage points as a flexible benefit since last year.

The second most popular category is insurance, offered by 70% of respondents. This is an increase on the 59% that provided insurance benefits in 2018. Almost three-fifths (58%) of employers offer private medical insurance (PMI) on a core basis to employees in 2019. This has become increasingly common over the years, as in 2001, PMI was only offered to staff on a core basis by 24% of surveyed organisations.

Despite the overall proportion of employers offering group risk products increasing by 13 percentage points since 2018, some of the benefits in this category have seen a decline in popularity in the past year. For example, although the majority (80%) offer life assurance or death-in-service on a core basis in 2019, this is a drop from the 90% that did
so in 2018.

More than half (58%) of respondents currently provide staff with income protection, which represents a 15 percentage point decrease from 73% in 2018. Critical illness has also seen a decline in popularity year on year, with 17% of organisations providing this as a core benefit in 2019, versus 25% in 2018.

Declines in these areas may reflect an increased focus on wellbeing benefits, which have seen an 11 percentage point growth in popularity since 2018.

This trend is illustrated by a 10 point increase in the number of subsidised gym, sports facilities or classes (30%) being offered by employers, and a seven percentage point rise in access to mental health or wellbeing apps (37%).

The fact that 11 of the top 20 core healthcare benefits fall into the category of wellbeing support perhaps reflects the wide range of initiatives both available to, and actively offered by, employers.

Nevertheless, some wellbeing benefits decreased in popularity between 2018 and 2019, most notably the provision of online lifestyle health assessments, which has dropped from 34% to 23%.

In terms of core occupational health benefits, 50% of respondents’ organisations provide an outsourced practitioner or department; this shows a sharp decrease since 2018, when this stood at 63%.

Health cash plans are lowest on the list of healthcare benefit categories for 2019, despite appearing in the middle of the table last year. Since 2018, the provision of cash plans for employees has dropped from 43% to 24% as a core benefit, and from 32% to 24% as part of a voluntary offering; for the latter, this sees a return to the level seen as far back as 2007.

Are you an HR decision-maker who would like to be part of our next research project, and be in with a chance to win £100-worth of retail vouchers? Click here to answer our pensions research survey…