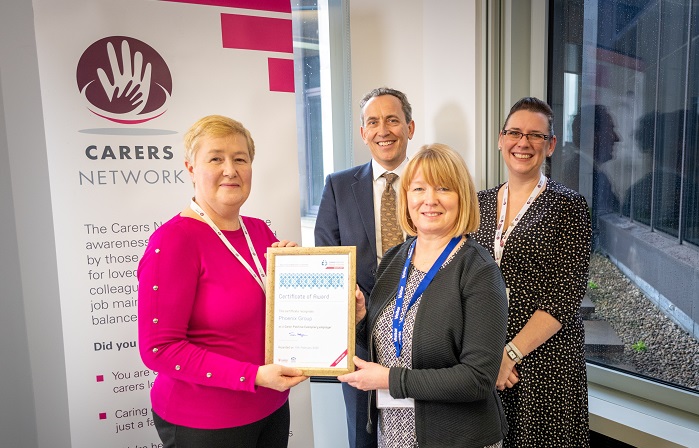 Pensions consolidator Phoenix Group has been recognised by non-profit organisation Carer Positive, operated by Carers Scotland, as an exemplary carer-positive employer in Scotland.

The award, announced today (11 February 2020) demonstrates the support that Phoenix Group provides for working parents within its organisation. Phoenix Group was awarded the ‘exemplary’ level three award, the highest accolade given to organisations which go above and beyond beyond their caring commitments to workers.

Stephen Jefford (pictured, middle left), group HR director and executive sponsor of the carers network at Phoenix Group, said: “We recognise that many [employees] will have a caring commitment at some point in their working lives. We want to ensure we support them in balancing their caring responsibilities alongside their career. We’re delighted to be recognised as a Carer Positive Employer in Scotland and believe that an appropriately thoughtful workplace helps colleagues remain committed and engaged through times of enduring challenge.”

Sue McLintock (pictured, middle right), manager, Carer Positive Awards at Carers Scotland, said: “We are delighted to recognise Phoenix Group as a Carer Positive Exemplary Employer. The [organisation] has worked really hard to develop and embed a strong culture of support for carers and is clearly committed to promoting the health and wellbeing of all employees. The award is well deserved and Phoenix Group sets a great example to other employers in how they value and support their colleagues to manage work and caring responsibilities.”

Kim Field: Employers must go above and beyond with inclusive benefits for carers