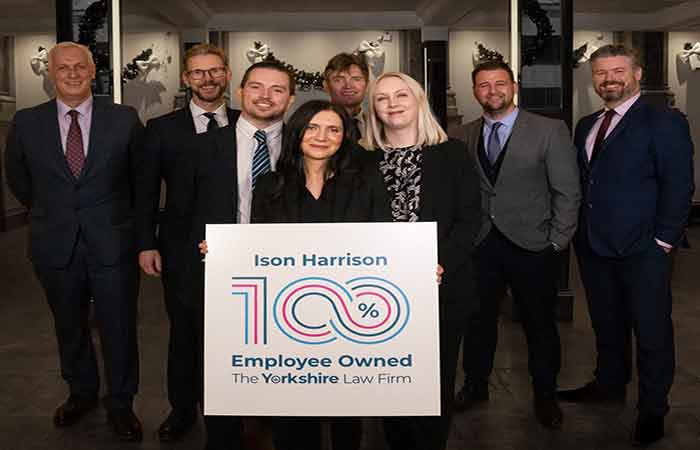 Yorkshire-based law firm Ison Harrison has become entirely owned by its employees after the three shareholder directors agreed to sell the business to an employee ownership trust (EOT).

Ison Harrison, which has 16 offices throughout the region, was founded in 1978, and now employs more than 230 staff. Its directors decided against a traditional business sale or merger and instead opted for an EOT, which will see the workforce owning 100% of the business.

Jonathan Wearing, who has been head of the firm for 15 years, will maintain his role as managing director, while the other two shareholder directors, Richard Timperley and Dominic Mackenzie, will continue as finance director and head of private clients respectively.

There will be eight management roles on the board in total, including new directors James Thompson, Gareth Naylor, Jenny Bland, Sarah Laughey and Richard Coulthard.

According to Wearing, the directors felt that considering its size, a new structure was necessary for the business to continue to grow. He added that by becoming an employee-owned business and extending the breadth and reach of the board, Ison Harrison was well set up for whatever the future holds.

Wearing explained that converting into an EOT means that everyone now has a stake in the business and can share in the success and profits that are made going forward, while the structure also offers stability, job security for dedicated members of staff and a platform for further growth.

“Employees will have a greater influence over the future direction of the firm, will financially benefit from the ongoing success of the business and continue to deliver unrivalled client service in the multitude of private and commercial arenas in which we operate,” he said.

“It will allow us to involve and reward everyone, attract talent in the region and demonstrate a genuine point of difference in a competitive market.”

Poll: Is your organisation introducing any new staff wellbeing support benefits for the new year?

How can I ensure my company has the right data to make informed decisions around pay and reward?