The world’s strongest currency in November was not the US dollar, despite the greenback rallying 3.5% against the euro, 8.7% against the Japanese yen and over 8.6% versus the Mexican peso and the Turkish lira up to yesterday’s close.

The strongest currency last month was sterling, which had strengthened 2.2% versus even the mighty US dollar. In fact, November was the biggest monthly sterling rally on a trade weighted basis since January 2009, and the fourth biggest since 1990. This is probably due in large part to speculative short positions against sterling reaching a record in October, levels that more or less persisted through early November. These extreme positions meant that it didn’t take much positive news flow (for example, the Brexit court defeat for the UK government on November 3rd) to see a sharp bounce back.

The current trade-weighted level of sterling, if maintained, could have a profound effect on the short to medium-term outlook for UK inflation. At the beginning of last month, the Bank of England (BoE) released its quarterly inflation report, which stated that the BoE’s central projection for UK inflation was 2.7% by end 2017, and peaking at 2.8% in 2018 before falling to 2.5% in 2019. But when formulating its most recent inflation forecasts, the BoE took the average market prices for the 15 days up to October 26th. Since then, sterling has rallied over 5% on a trade-weighted basis. A 5% move higher in sterling should translate into a 0.5-0.6% lower CPI inflation rate versus what the BoE thought less than four weeks ago, where this will be spread mostly over 2017, but also over 2018.

It is not only sterling moves that would have helped the UK’s inflation outlook. Taking the 15-day moving average applied by the Bank of England, the oil price has also dropped by 8.8% since the BoE ran the numbers that fed its inflation forecast, even accounting for the 8.8% jump in crude oil yesterday. Oil will likely continue to be highly volatile in the coming days and weeks, but a 9% move lower in oil would be expected to reduce the Consumer Price Index (CPI) by between 0.1 and 0.2% over the coming year relative to the BoE’s previous forecasts, before falling out of the year on year inflation numbers. 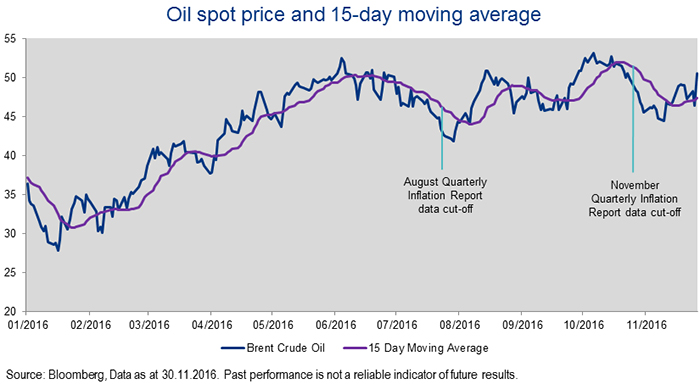 Combining the moves in sterling and oil means that if the BoE re-ran its models today, we would likely see UK CPI in 2017 of around 2.2%, and peaking in the region of 2.5% in 2018, before falling back towards target. In other words, very similar to the projections in the BoE’s quarterly inflation report at the beginning of August, when the BoE took the decision to cut the base rate and restart its quantitative easing (QE) programme.

It is also worth highlighting that four months post the Brexit referendum, there is still surprisingly little evidence of UK inflation rising at all, let alone by the extent priced in by the market. The most recent UK inflation data to the end of October came in materially below expectations, where headline CPI inflation was just +0.9% Year on Year. Even more remarkably, core inflation of +1.2% YoY to the end of October matched the lows of this year.

In the light of recent market moves, therefore, we now have even greater conviction that UK market-implied inflation rates are grossly over-egged. Linked to this, we are also more constructive on conventional gilt valuations at current levels.

Investing involves risk. The value of an investment and the income from it may fall as well as rise and investors might not get back the full amount invested.

Past performance is not a reliable indicator of future results. If the currency in which the past performance is displayed differs from the currency of the country in which the investor resides, then the investor should be aware that due to the exchange rate fluctuations the performance shown may be higher or lower if converted into the investor’s local currency. The views and opinions expressed herein, which are subject to change without notice, are those of the issuer companies at the time of publication. The data used is derived from various sources, and assumed to be correct and reliable, but it has not been independently verified; its accuracy or completeness is not guaranteed and no liability is assumed for any direct or consequential losses arising from its use, unless caused by gross negligence or wilful misconduct. The conditions of any underlying offer or contract that may have been, or will be, made or concluded, shall prevail.

This is a marketing communication issued by Allianz Global Investors GmbH, www.allianzgi.com, an investment company with limited liability, incorporated in Germany, with its registered office at Bockenheimer Landstrasse 42-44, 60323 Frankfurt/M, registered with the local court Frankfurt/M under HRB 9340, authorised by Bundesanstalt für Finanzdienstleistungsaufsicht (www.bafin.de). The information contained herein is confidential. The duplication, publication, or transmission of the contents, irrespective of the form, is not permitted.