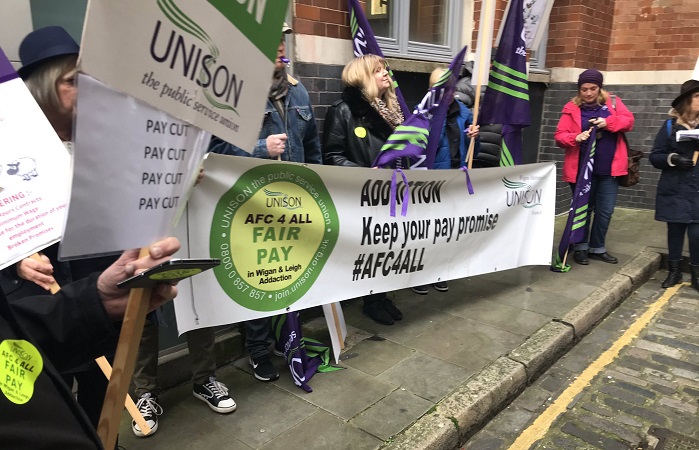 Drug and alcohol support staff employed by London-based charity Addaction are undertaking industrial action, spanning from 4 November to 8 November 2019, over the alleged reversal of pay promises made by their employer.

The 31 employees, based in Wigan and Leigh, were originally employed by the NHS before their employment contracts were transferred to Addaction; as a result, their pay rises are no longer in align with those of NHS employees.

When the NHS removed its 1% pay cap in April 2018 and implemented a three-year pay rise, Addaction did not follow suit, despite having given assurances that it would, according to trade union Unison, which represents the 31 employees.

Unison estimates that these individuals have lost approximately £1,000 a year since 2018 as a result of their removal from the NHS pay structure.

Addaction employees voted unanimously to take strike action when the internal grievance process and talks with Advisory, Conciliation and Arbitration Service (Acas) did not deliver a solution or an end to the dispute.

On 6 November 2019, 15 employees demonstrated outside the Addaction’s London office; employees have also manned picket lines throughout the strike at their working locations in both Leigh and Wigan.

Paddy Cleary, north west regional organiser at Unison, said: “These dedicated support workers have sought answers from Addaction bosses for years; unfortunately, they have been ignored by their employer. [On 6 November], they took their fight from Wigan and Leigh all the way to Addaction’s central London headquarters.

“It’s wrong that these drug and alcohol support workers have been forced to take 11 days of strike action and to travel all the way to London simply to be heard by their managers. We spoke to a member of Addaction’s executive team and made clear that the organisation must find a resolution to this dispute.

“Addaction [employees] want to return to work, but only once they receive the pay rise they are owed and which they have been repeatedly promised. This group of [employees] will not be going away, they are strong, resolute and will keep fighting for the fair pay and fair treatment they are entitled to.”

Dave Prentis, general secretary at Unison, added: “These highly trained workers do important, difficult jobs and deserve to be paid properly. It’s a slap in the face to know that colleagues doing similar jobs are earning up to £1,000 a year more.

“Addaction has reneged on its pay promises and left staff out of pocket and angry. It has to sort out this clear injustice now.”

A spokesperson for Addaction said: “As a charity, we’re committed to providing the best possible support for people who use our treatment services, whilst also providing our staff with a fair wage and good working conditions. This is true for all our services, from Cornwall to Wigan, to the north of Scotland. Cuts to local authority budgets have significantly reduced funding for drug and alcohol services in recent years, meaning this can be a tough balance to achieve.

“We understand and empathise with the concerns expressed by our colleagues in Wigan and we’re doing our best to find a way forward together. We’re committed to trying to work through the issues in a way that is fair and sustainable for our staff, the people who use our services and the local community.”