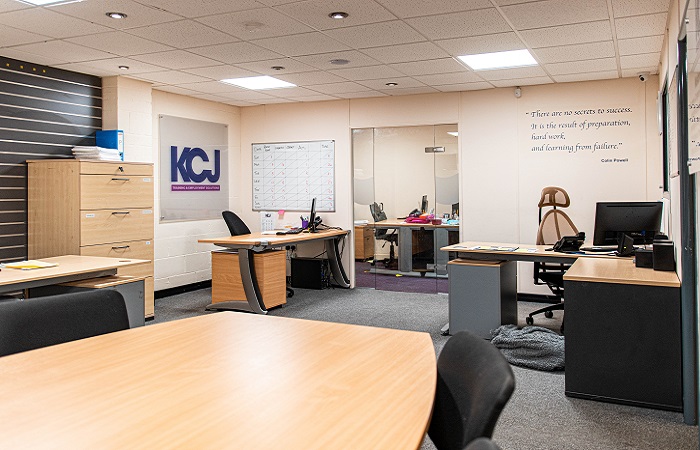 Beneath a widely-publicised debate about the policy, which Bryden introduced with the hope of helping non-smoking staff among his 11-person workforce match the time their smoking colleagues got in additional breaks, as well as encouraging smokers to see the benefits of quitting, was a story about a small business with an innovative approach to engagement and reward.

“I do expect a return, but I do also believe that my staff deserve rewards,” explains Bryden. “As a business, I say that my staff are my family, and if I look after them, they’ll look after me.”

In 2019, for example, Bryden took all staff and their partners on a trip to La Mariposa in Spain, a favourite holiday destination for his own family. During team-building exercises and adventures such as white water rafting, employees were able to get to know one another and build bonds that have helped to create a strong workforce back on home soil.

In a similar vein, KCJ employees are currently working towards a range of targets, from job-related goals to keeping their desks tidy and getting to work on time. The highest achiever by the summer of 2020 will be gifted a trip to Las Vegas for themselves and their partner.

Among the other perks available to them, KCJ staff can also avail themselves of the free on-site boxing gym, as well as working with a personal trainer.

For 2020, Bryden’s main goal is to focus on working parents, with plans to build an on-site crèche, in order to help staff achieve work-life balance, reduce financial and psychological stress, and return to work with greater ease following parental leave.

“I thought, what a cracking idea that would be, to have [an employer] that allows mums or dads to bring their children to work,” says Bryden. “I value those [working carers], and I can offer an incentive for a mum to come back earlier if they want to, where that coming back earlier doesn’t break the bank; the money they earn doesn’t go straight to childcare, because they have the opportunity to bring their baby to work. On the flip side, mums and dads who are working for me who get stressed out can go and sit with the little one for a while and take a break.”

KCJ’s benefits strategy is, at its core, driven by Bryden’s sense that employees should be highly valued. For the most part, this manifests in celebrating staff achievements, but has in some instances meant a more sensitive approach, such as paying for a struggling employee to see a counsellor during a time of need.

For Bryden, this is simply the correct way to conduct business, an attitude that is reflected in his commitment to, and foundation of, various charity initiatives that give back to the local community; however, having a driven, loyal and motivated workforce is also an undeniably positive result.

“I’ve got such a loyal bunch of happy, smiling staff members in this office,” says Bryden. “We all care about each other, and they work like Trojans. They’re doing it off their own backs, because they want to succeed here and there are cracking incentives. It’s got nothing to do with how much we pay.”

Although pay at KCJ is average and above, the perks and culture are deliberately beyond the norm, says Bryden. It is ultimately this culture of care, evidence of the value of employees, and innovative perks and opportunities, that keep staff invested, motivated and loyal.