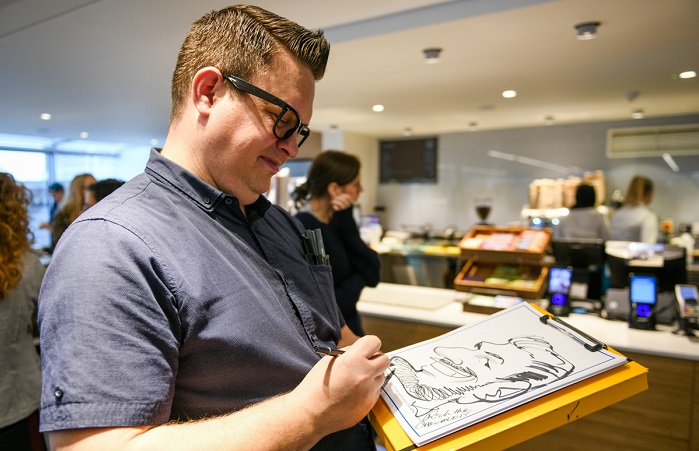 On 28 November 2018, London-based publisher Hachette undertook a workplace event aimed at getting the 930 employees in its Victoria Embankment office enthused about their pensions. This is particularly important as, with a workforce predominantly aged between 25 and 40, it can be difficult to engage staff with a topic so seemingly distant.

Catherine Wells, HR director, adult divisions, at Hachette says: “One of the things I’m worried about is that people don’t engage with pensions early enough. In addition, there’s also a [group] who, when they started work, signed up to final salary schemes and haven’t been used to actively having to manage their investments.”

Two caricaturists set up shop in the organisation’s on-site coffee shop and canteen, so as to attract the most footfall, and were joined by representatives from Pension Geeks and Hachette’s pension provider Aegon.

Employees, drawn in by the fun atmosphere and engaging activities, were able to speak to experts from Aegon regarding their workplace pension, and from Pension Geeks about other concerns, such as questions around state pensions.

“The fun stuff just really helped people think about it,” says Wells. “The fact that [the experts] were fun and approachable [was] really important, because pensions is something people shy away from.”

Over the course of the day, approximately 120 caricatures were drawn, and around 65 individuals spoke to Aegon’s representatives.

The event also included three half-hour long seminars, which introduced attendees to details about their workplace pension, as well as discussing topics such as auto-enrolment.

On the day, employees were reminded of the provider’s consultation service, given the opportunity to book appointments for further advice, and provided with forms to increase their contributions.

Freebies, including a branded Aegon coffee cup and novelty Pension Geeks ‘geek glasses’, not only added to the vibrancy of the day, but also ensured that employees would have a visual reminder on their desks after the fact.

Although it is difficult to mark the precise effects due to recent changes to auto-enrolment regulations, Wells has observed an uptick in interest and engagement, as well as an increased awareness of how other factors, like owning property before retiring so that a pension does not have to cover rent, might influence their wellbeing later in life.

“We have seen more engagement in pensions,” she explains. “I’ve had people say that because of that pensions training [they] went and bought a flat. It is permeating, definitely.”

Since the event, Hachette has continued to provide talks and seminars on a range of financial wellbeing issues, encouraging employees to consider what they could be doing now, such as getting on the property ladder, managing loans and understanding tax and national insurance, all of which might have effects on their retirement they had not previously considered.

“We have had people from our actuaries come and run half-day training events which is a broader [type of] financial education, we call them ‘how to save enough to give up work’,” says Wells.

Savers have accessed £28.4 billion through pension freedoms since 2015