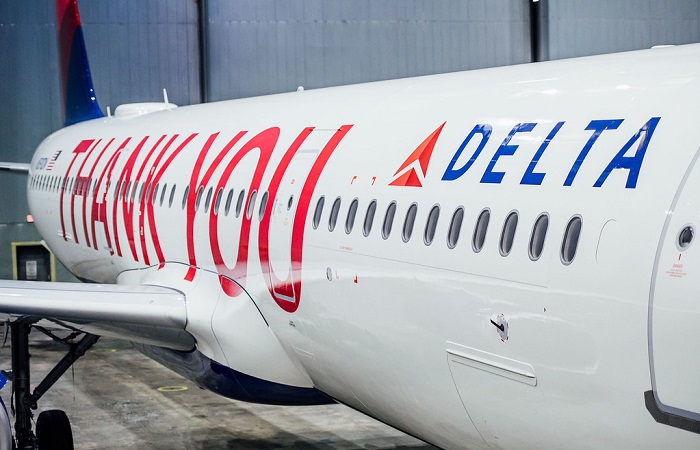 Following on from the announcement in January that it was sharing $1.6 billion (£1.2 billion) of profits with staff, air travel organisation Delta Air Lines has unveiled a new plane livery dedicated to all 90,000 of its employees.

Delta has shown its appreciation for the hard work of its employees by creating a livery which uses the name of every employee to form the words ‘thank you’. The aircraft will fly in the signature livery for approximately one year.

Announced by chief executive officer Ed Bastian on 14 February 2020, the thank you message has been featured on the Airbus A321 aircraft. It was designed and produced by in-house Delta employees, and involved 45 decal panels, taking a week to be completed at the Delta TechOps print shop in Atlanta.

The plane was unveiled as part of an event celebrating the profit-sharing announcement, which took place in the organisation’s headquarters location of Atlanta.

Joanne Smith, executive vice president and chief people officer at Delta Air Lines, said: “It’s all about Delta people sharing in the success they make possible through hard work and a focus on our customers. We’re often asked what sets Delta apart, and the answer is simple: our people.”

Joel Freeland, a tech ops painter who worked on the project, added: “It’s so wonderful to get to do a project like this. The idea was conceived within Delta, and all the employees working together have made it a reality.”

Employee recognition programmes – just why are they so important?