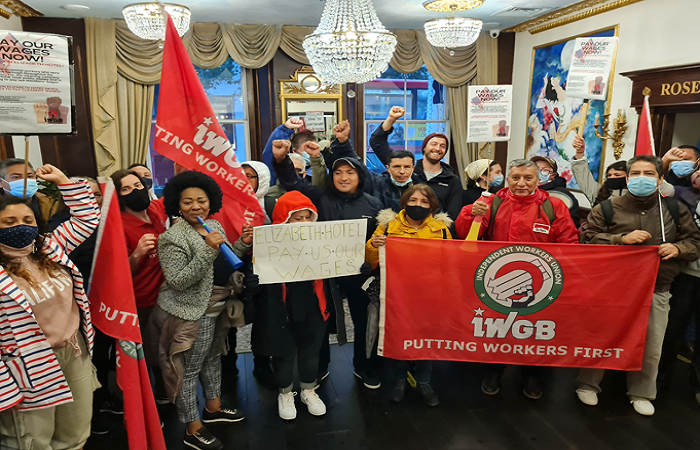 Cleaners at London Elizabeth Hotel have won back £4,733 in furlough wages that they were denied by outsourced cleaning business Pridegreen after holding protests.

On 2 October, 25 cleaners and supporters staged a demonstration on the hotel premises, organised by the Independent Workers’ Union of Great Britain (IWGB), as staff had reportedly not been paid while the company continued to claim money from the Coronavirus Job Retention Scheme (CJRS).

HM Revenues and Customs public records highlighted that Pridegreen claimed between £10,000 and £25,000 per month from the CJRS between December 2020 and June 2021.

According to the IWGB, it first intervened back in June 2020 after cleaners were not paid, and the case was escalated to an Advisory, Conciliation and Arbitration Service claim. The wages for April to June were eventually paid, but IWGB has stepped in several times since because Pridegreen reportedly kept failing to pay staff on time, or at all.

Wilson Ayala, chair of the cleaners and facilities branch at the IWGB, explained that he is very pleased that the workers have been paid the wages that were “unlawfully retained” by the hotel, but noted that it would not have happened if they had not resorted to their campaign.

“During the pandemic we have helped to recover thousands of pounds of furlough wages that were denied to low-paid workers by exploitative employers like Elizabeth Hotel, and this only goes to show that the current law enforcement is not fit to protect these precarious workers who need it most,” Ayala said.

Henry Chango Lopez, general secretary of IWGB, added: “This is a major victory for our members and it comes at the end of a long campaign against Pridegreen, which left their workers without a livelihood at the height of the pandemic.”

The London Elizabeth Hotel has been contacted for comment.