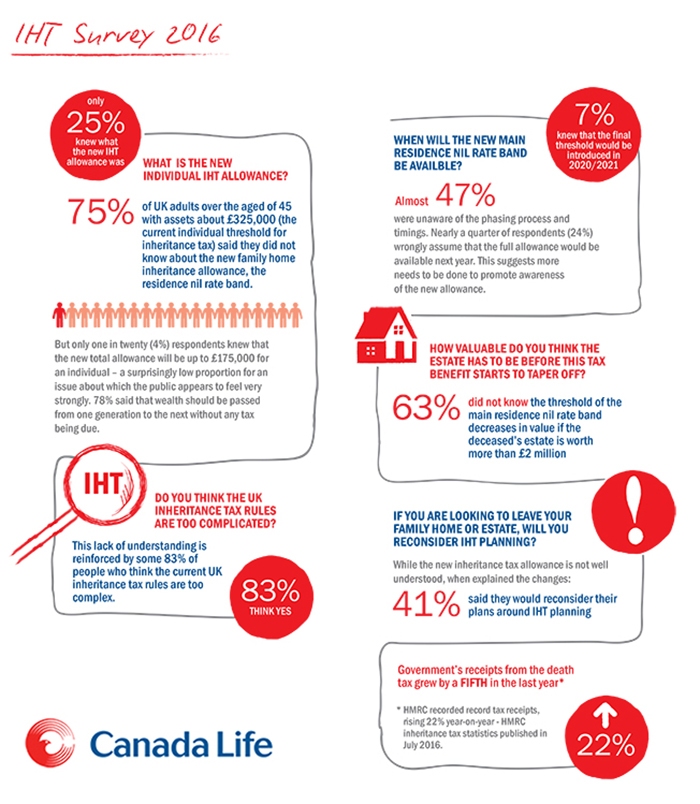 A remarkable 75% of wealthy people are unaware of the new “residence nil rate band“ inheritance tax allowance which is being implemented from April 1st, according to research by Canada Life*.

Among UK adults over the age of 45 with assets in excess of £325,000 (the current individual threshold for inheritance tax) surveyed, the overwhelming majority said they did not know about the new family home inheritance allowance, which provides a new additional allowance for passing on property wealth to direct descendants tax free, despite the widespread publicity surrounding the news.

The new allowance was announced at the 2015 Summer Budget and will start to be available to families from April next year. Meanwhile, the inheritance tax threshold has been frozen since 2009, meaning more families have been caught in the inheritance tax net as increasing property wealth and general inflation have pushed them above the threshold.

But only one in 20 respondents knew that the new total allowance will be up to £175,000 for an individual – a surprisingly low proportion for an issue that the public appears to feel very strongly about. 78% said that wealth should be passed on from one generation to the next without any tax being due.

When combined with the existing IHT threshold of £650,000 for a couple, the new allowance can increase the total amount that is tax free up to £1 million, however this is being staged in over the next four years.

Almost half (47%) were unaware of the phasing process and timings, with nearly a quarter of respondents (24%) wrongly assuming that the full allowance would be available next year suggesting that more needs to be done to promote awareness of the new allowance. Just 7% knew that the final threshold would be introduced in 2020/21.

More than 80% think inheritance tax rules are too complex

This lack of understanding can be explained by the view that 83% think the current UK inheritance tax rules are too complicated. The introduction of the residence nil rate band will do little to allay these fears, as it introduces new allowances and dates adding further complexity to the inheritance tax regime.

In addition the threshold of the main residence nil rate band decreases in value if the deceased’s estate is worth more than £2 million, something 63% were unaware of.

While the new inheritance tax allowance is not well understood 41% said they would reconsider their plans around IHT planning when the changes were explained to them.

“A new allowance that helps the many people caught by the freeze to the IHT threshold by their increasing property wealth is welcome – but it is only useful if it is understood.

“The findings of our research reveal a widespread lack of understanding about the new family home allowance, even though it will be available from April and should be part and parcel of any estate planning already.

“Eight out of 10 wealthy Britons think the inheritance tax regime is far too complicated and most will need help from professional advisers to steer them through the rules. Complicated rules and a widespread lack of knowledge means families face paying over the odds but  seeking clear advice and planning ahead, would ensure they don’t pay more than they need to. With the Government’s receipts from the death tax growing by a fifth in the last year, this is clearly not a tax just for the wealthy. **

* Survey of 1,001 UK consumers aged 45 or over with total assets exceeding the individual inheritance tax threshold (nil rate band) of £325,000. Carried out in September 2016. Percentages may not add up to 100 due to rounding or multiple answer questions. Research conducted by Atomik.