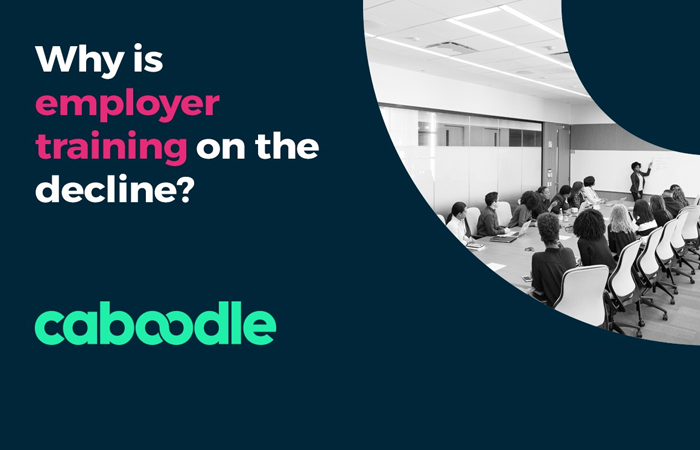 Research by CIPD in July this year shows that employer training has been declining since as far back as 1998, even despite the introduction of government initiatives in attempt to stop the decline. So, why is this the case? And what can employers do?

Participation in training has declined 20% in the last 20 years

According to research by CIPD, there has been a 20% decline in work-related off-the-job learning between 1998 and 2018.

They also found that in around 33% of all businesses, 50-100% of all training that occurs is health and safety or induction based.

According to the quarter Labour Force Survey, the amount of training that has lasted less than a week has increased from 36% in 1998 to 54% currently.

According to the Employer Skills Survey, the number of training days per employees fell from 7.8 days per year in 2011 to 6.4 days in 2017.

How has employer investment in training changed?

Statistics show there’s actually been a slight increase in investment in training by employers in recent years.

According to the Employment and Skills Survey, overall investment in training by employers has gone up from £43.8 billion in 2011 to £44.2 billion in 2017.

However, in that time the size of the workforce has grown, and so investment in training per employee actually fell by 23% between 2005 and 2015.

So, what are the reasons?

It’s been suggested in the Skills and Employment Survey that are now less roles with high-skill level requirements than before. Since 2012, the number of roles that require a degree have stagnated.

It could be that training has become more cost effective than it once was. Better training means less time needed to train and therefore the cost required to train an employee is reduced.

However, other developed countries have still continued to invest further in employee training, and the UK is one of the only countries to have seen a decline.

The Continuous Vocational Training survey found that employers in the UK spent on average 293 euros per employee on vocational training, while Germany and France spent 686 euros and 1,154 euros respectively.

One reason could be that changes in the education system over the last 20 years have meant that employer training has become less of a requirement.

However, in the UK the number of people gaining qualifications had been on the decline from 2012 until it increased by 2% in 2016, according to HESA.

It could simply be that employers are less willing to invest in employee training, which could be caused by a number of macroenvironmental factors. A lot can change in the business space over 20 years, and it could well be that overall, employers’ strategic aims and goals have shifted.

What can be done?

The CIPD recommends that employers invest more in apprenticeships. The UK government introduced the apprenticeship levy in 2017 with one of the main aims being to reverse the ‘long-term trend of employer underinvestment in training.’

The CIPD suggest that all employers with over 50 employees should contribute to apprenticeships at a rate of 0.5% of their payroll as a minimum. They also suggest including other forms of accredited training for employees on top of apprenticeships.

As mentioned, one of the reasons for a decline in employer investment in training could be that employers’ strategic aims and goals have shifted towards this.

There isn’t a direct link between underinvestment in training and poor productivity, but there is a gap in productivity between the UK and other countries such as Germany, France and the U.S.

Therefore, could it be worth employers shifting their business strategies towards investing more in training in order to improve productivity?

But why would employers invest in training for employees when those employees could go on to use those skills elsewhere?

How employee benefits can help

High turnover costs UK businesses too. For a company with 100 employees, a turnover of 19% (the average annual turnover rate in the UK) could cost that business around £60,000 per year (where the Society for HRM finds that the average cost-per-hire is £3,223.)

Employee benefits boost retention and could help significantly reduce the cost of recruitment. It could then open the door for more investment in employee training, resulting in a loyal workforce that’s more productive, higher skilled and happier.

In the UK, investment in employer training has not only been on the decline but it is lower than many other developed countries across the world. Furthermore, productivity is also lower than in many other countries. Investing in employee training, alongside introducing employee benefits that will boost retention, could see huge benefits for businesses. While it would require a lot of strategic change for a business, the rewards are there to be gained.

The role of the travel season ticket loan under hybrid working

The importance of the Technology Scheme

Why a broad health and wellbeing benefits provision is so important