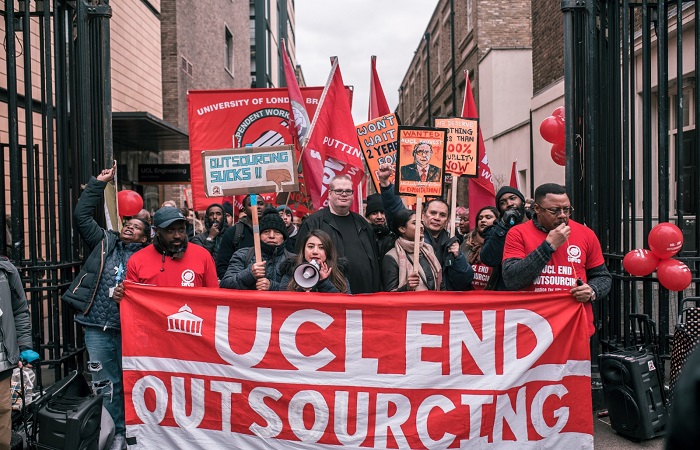 University College London (UCL) academic, support and domestic staff have joined together for the first ever combined strike of direct and outsourced university staff today (4 December 2019).

Represented by the Independent Workers Union of Great Britain (IWGB), staff including outsourced cleaners, porters and security officers who are currently employed by Sodexo and Axis, are striking in a bid to end outsourcing at UCL.

IWGB has claimed that outsourced workers are receiving worse terms and conditions than their in-house equivalents, impacting pension entitlement and paternity leave.

Following discussions with the university’s recognised trade union Unison, UCL confirmed that security, cleaning, portering and catering staff not already on equal terms will receive the equivalent of an additional seven days’ annual leave, calculated on a pro-rata basis, effective from 1 December 2019, as well as additional leave to cover university closure days.

Furthermore, outsourced staff will see pay scales increased in line with directly employed staff from 1 April 2020, and will receive enhanced sickness benefits from 1 July 2020. According to UCL, all other benefits will be levelled up by August 2021 at the latest.

The decision to harmonise pay and benefits for outsourced and direct employees will affect approximately 800 members of staff working for Sodexo, Axis and Aramark.

Meanwhile, UCL academics and support staff, represented by the University and College Union (UCU), have been striking since 25 November 2019 with employees from 59 other universities. This concerns a dispute over changes to the USS pension scheme and the universities’ failure to make improvements to pay, equality, casualisation and workloads.

Maritza Castillo Calle, University of London branch chair at IWGB, said: “There is a near consensus at UCL that outsourcing has to end and that all workers should be put on equal terms and conditions, but management continues to drag its feet. These joint strikes will send a clear message of unity, with all those that keep the university running on the same side of the picket line, while Provost Michael Arthur will be on the opposite side. It’s not too late for management to get on the right side of history and agree to our demands and those of the directly employed staff.”

Dr Saladin Meckled-Garcia, UCL branch vice president at UCU, added: “Our action represents a wholesale resistance to the turning of universities into businesses and commercial concerns, rather than communities of learning and scholarship. Our vice chancellors are more interested in building new buildings and campuses into which to pack students so as to benefit from their fees. We see the struggle of IWGB outsourced workers as continuous with this resistance and that is why we are proud to be on strike with them on 4 December.”

Matthew Blain, executive director of HR at UCL, said: “Our colleagues in cleaning, security, portering and catering do vital jobs for UCL and we are committed to ensuring that they are rewarded fairly in line with all other staff.

“Unison is our recognised trade union and we are pleased that our negotiations have been positive, professional and productive. We will continue to work closely with their staff representatives to ensure that we are able to equalise pay and benefits as soon as we can. We have listened carefully to their concerns and are acting.”