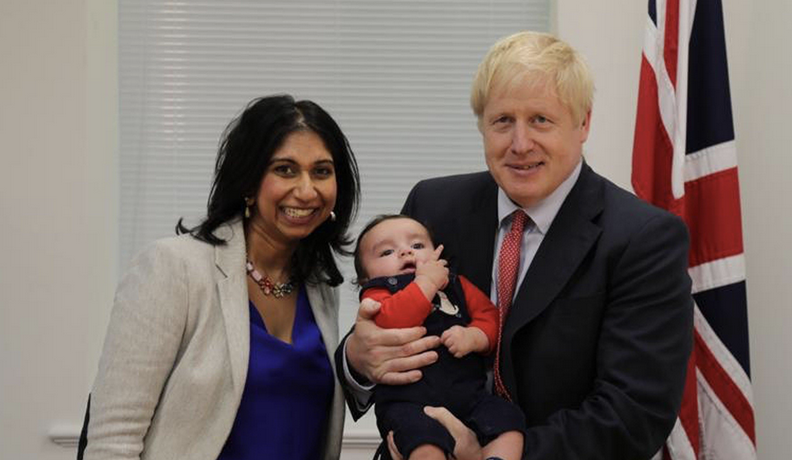 A legal loophole that meant ministers effectively needed to resign to be able to spend time with their newborn child has been addressed, with the announcement of the first reading of the Ministerial and other Maternity Allowances Bill yesterday.

Due to ministers being appointed by the prime minister (PM), they are currently not ‘employees’ in the traditional sense of the word and are the not therefore entitled to maternity leave. So far, any time off has been awarded at the discretion of the PM.

Now, under the provisions of the bill, cabinet ministers will be allowed to receive up to six months’ leave on full pay.

The new law should allow pregnant Suella Braverman (pictured with her first child and PM Boris Johnson) – the government’s chief law officer and most senior female government officer – to now take time off. Her second baby is due at the end of this month.

Commenting on the bill, a Downing Street spokesperson said: “The current rules are clearly outdated and need fixing, which is why we are introducing the Bill. At the moment women are offered the choice between either resigning from their position or taking time off to recover from childbirth, which is simply not acceptable in the modern times.”

But despite being widely applauded as a step towards equality, eyebrows have already been raised as the generous terms.

“It’s good to see government finally introducing maternity leave,” said The Women’s Equality Party, “but offering ministers six months on full pay while expecting most women to survive on a maternity allowance of £151.20, and failing to offer shared parental leave shows just how out of touch they are.”

Joeli Brearley, CEO of campaign group Pregnant Then Screwed, said: “The bill doesn’t go far enough. It is disappointing there is still no maternity or paternity leave for MPs. If the prime minister is serious about create a gender equal Parliament, then parental leave policies for MPs are absolutely essential.”

The second reading of the bill will be heard on 11 February, before moving committee stage. Labour has already said it will support the move.