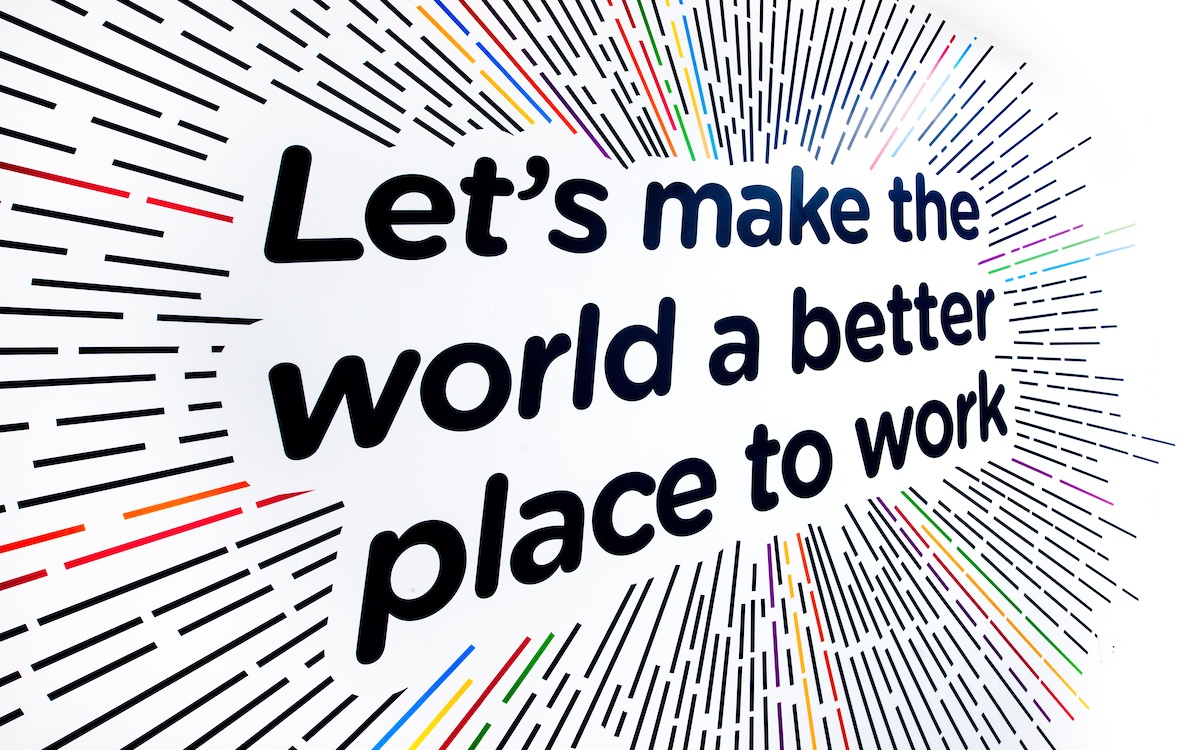 by Glenn Elliott, CEO and Founder

A lot of people get happiness and engagement confused. The internet is full of websites, products and eBooks claiming quick fixes to employee happiness and resulting magical impacts on productivity, much of it missing the point completely. Even at home, Reward Gateway had “Let’s make the world a happier place to work” as its mission for many years before we realised our error and changed it to “Let’s make the world a better place to work.”

I’d known that our mission statement was wrong for several years – our definition of engagement was solid, our understanding of why engagement mattered was solid and neither of them mentioned happiness.

I knew that happiness and engagement were related but I didn’t really understand the connection properly until the summer of 2016.

I have Reward Gateway’s head of programme Angie Angjelovikj to thank for enlightening me. Angie had been with us since we acquired Dazines, a software engineering company back in 2014 which she ran with her husband Seb Aspland, with Seb joining us as head of product. The acquisition was a big success and together we grew the product and engineering team from our 10 plus their 32 to nearly 100 people that we have today, building some of our best new products as a result.

But in 2016 we recognised a need to shift some more of our footprint to the US. It was our biggest growth opportunity and there was exciting work going on there in employee engagement. Moving a senior product role to the US could give us access to talent and experience from that market and it could position us really well for further growth. So after several weeks of discussion with Richard Hurd-Wood, our chief product officer, we decided to move Seb’s position to Boston. That meant cutting Seb’s UK role in the process.

Seb took the news as well as he could. He is talented and able and knew he’d get another job in a second. Angie, however, was furious with me.

What was I missing?
The change was part of a bigger restructure and I followed our employee communications playbook to the letter – over communicating, staying with the issues, leaning in and explaining ‘the why’. But none of it mattered to Angie. With a super-strong work ethic born from a Balkan upbringing, there was no strategic reasoning that Angie wanted to hear. I had fired her husband (her words), which was clearly a slight on his work and his effort and it was grotesquely unfair. She was too cross to speak to me and we avoided each other in the office for a fortnight.

But then, at the end of a meeting about new Boston office project, we were both alone in a conference room and she gave it me with both barrels.

Angie is something of a force of nature. Rarely have I ever met anyone with anything like her capacity for work. The previous time I’d incurred her wrath was back in 2015 when I suggested hiring a project manager to help us build a new London HQ. I suggested this trying to be helpful – it seemed a bit much to have Angie running our whole software engineering programme (seven teams and 80 people) and then also run a £1.5m office refit project at the same time. But to Angie this was a slight on her work. “Why are you taking work off me? What have I done? How have I let you down? I’m busting my ass here to learn this new area and deliver these projects and this is how you repay me?” It was a phone call I won’t forget in a hurry.

She’s a true superstar, Angie. Trustworthy, dependable, insanely hard working and formidable – she is the sort of person you want on your side. If she left, we’d have to replace her with a team of three.

I listened to Angie carefully, challenged her points as sensitively as I could, corrected misunderstandings and re-explained the strategy. I gave every assurance I could that the decision was strategic and was not about Seb.

I was pleased we’d had the meeting, I always think things are better discussed and out in the open rather than bottled up. But still, I went home that night and slept badly. Was she right? Was I losing touch? Had I treated Seb badly? All entrepreneurs know those awful hours of darkness, often fuelled by jet-lag when the self-doubt sets in and the simplest thing becomes a huge, sleep preventing torment.

But I did finally get to sleep and when I woke up something was clear to me.

Angie was a deeply engaged member of staff. She knew what we were trying to do as a business, she knew exactly how her role was critical to that mission and she was, in her words, busting her ass to make that happen. But at the same time she was not happy – either with me or the organisation.

She was angry and disappointed. And it didn’t affect her engagement or her performance one bit. So that’s the moment when I learned that you could be highly engaged and, at least temporarily, very unhappy.

Does this mean all happy employees are disengaged?
The inverse is also true, contrary to what some people think, I’ve found you do not need engagement to be happy – it is not a critical ingredient. I’ve found companies that have quite happy employees based on a combination of good working conditions, low ambition and low accountability for results. This tends to result in the best people leaving and an average group of people staying and finding meaning and self-actualisation outside of work. It’s pretty dreadful for organisational performance though, and you can guarantee those companies won’t have the durable and resilient cultures needed to navigate the tough years ahead.

We’ve spent most of the last 10 years wanting to make the world a happier place to work and I’m proud of the work we’ve done together. But as we look ahead to the next 10 years it was clear, making the world a better place to work was a deeper, more meaningful and more important challenge and one that we’re really excited about.

This story is an excerpt from the new book The Rebel Playbook for Employee Engagement published by Wiley later this year.

Creating a return to work plan that works for all employees

Webinar: Why introducing flexibility into your benefits offering is crucial in the new world of work

Why increased workplace productivity starts with the right HR integrations