Royal London carried out a UK wide survey with 2,500 consumers age 35-44 over the summer. The survey found that over a third, 34 per cent, said their finances felt Squeezed and so were struggling to meet day-to-day expenses, despite 87 per cent being aware that they need to save more.

However, the survey did also identify positive Savings Moments of Truth when some financial commitments such as car finance or nursery costs come to an end which could free up money to be used to save for retirement.

To support the research with consumers we also wanted to find out what our advisers thought. Nearly half of the advisers surveyed said clients who class themselves as Squeezed (that is, where keeping up with bills and repayments is a constant struggle) are engaging with their retirement savings but are struggling to save more. 150 advisers responded to our poll which concluded:

While our findings show that many people are ‘Feeling the Squeeze’, it is good news that advisers think their clients are engaged with saving for retirement. Even if people can’t afford to save more now, it is possible to create a definite plan of action to save more in the future when their income increases or outgoings are reduced.

Identifying your client’s Savings MOTs could help encourage them to redirect freed up finances into their retirement savings.

For example, those with a mortgage to be paid off within the next 15-20 years could contribute five years of payments which on average are £500-£599 per month into their pension, securing a potential boost to their pension pot of over £20,000.*

Fiona Tait continued: “Nearly half, (45 per cent) of 35-44-year-olds surveyed, said that after first speaking to an adviser about their pension options they are now reviewing their finances with an adviser at least once a year. These reviews are a great opportunity to reassess a client’s current pension savings and set in place those Savings MOTs to potentially boost their future income in retirement over the long term.”

Read more detail on the Royal London’s Feeling the Squeeze research and the Savings MOTs or speak to your usual Royal London contact. 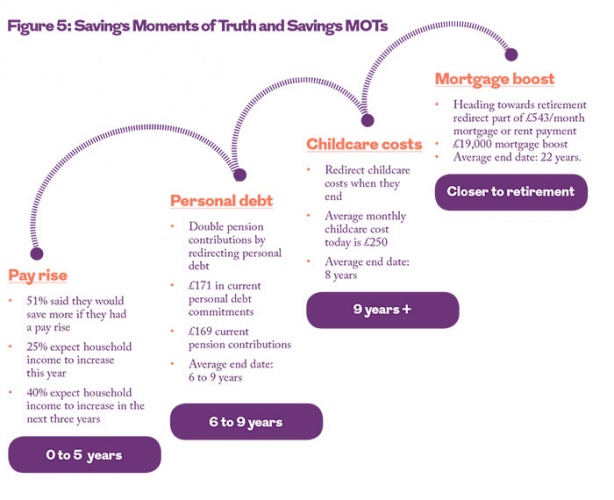 The findings of Pensions Through the Ages: Feeling the Squeeze, are based on in-depth quantitative analysis of 2,418 people aged 35 to 44 across the UK using a bespoke survey panel conducted by Harris.

Auto enrolment – so far so good?