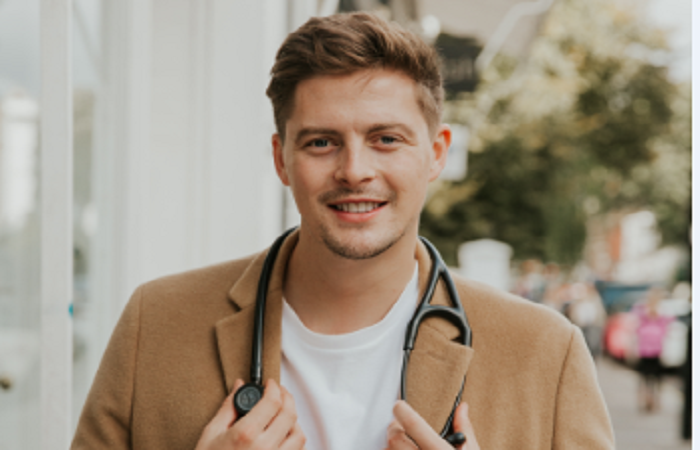 Employee Benefits Live 2021: Promoting a culture of positive mental health in the workplace is “everyone’s responsibility”, according to Dr Alex George, youth mental health ambassador to the UK government.

He said the pandemic had accelerated the focus on mental health among employers: “Over the last 18 months, this is something everyone has become acutely aware of, whatever your background is or where you are in the country. People lost loved ones and relationships changed as we were removed from our social circles. It’s made everyone stop and think about what matters to them.”

He reflected on his time working in A&E at Lewisham Hospital during the pandemic, where he felt lucky to be with colleagues despite the gruelling challenges they faced. George also has strong personal reasons for championing positive mental health, having lost his brother to suicide around a year ago.

George began his role as youth mental health ambassador in January 2021 after a letter he sent to the government calling for better mental health support for young people went viral on social media. He is now focused on building support hubs in communities where young people can access support.

The pandemic had changed the role of employers in terms of how they support staff to maintain a healthy work-life balance, he added.

“We’re still learning about working from home and hybrid working. Employers need to think about employees’ health at home as well as the traditional workplace. We may assume being at home is better for work-life balance but someone could easily be online at 8pm. Employers can focus on this by creating boundaries,” he said.

Fostering a culture of communication is crucial. “Talking, feeling comfortable at work to discuss mental health makes a huge difference,” he added. George described how small changes at his own workplace, such as asking someone how they are during a phone conversation, had helped colleagues to manage their stress.

“Setting mental health as an agenda is vital, but you need to do this in a way that makes people feel comfortable,” he said. “It is not the CEO’s responsibility, it requires everyone to set that culture and to be involved.” On a practical level, many organisations have benefitted from introducing mental health first aiders, but managers should not overlook small things such as time out for a team lunch or encouraging employees to exercise outdoors. Physical and mental wellbeing should not be seen as separate, but as part of the same continuum, he told delegates.

“All employees should know how to get support at work, whether it’s for themselves or if someone opens up to them and they know where to point them,” he added.

He urged delegates to turn mental health discussions into something positive, rather than the typical connotations of anxiety and depression.

“We have to change that view towards maintaining our mental health being seen as a positive,” he concluded. “For example, how have successful people got to where they are having looked after their mental health, rather than having overcome something? Workers that are happy and healthy are more likely to be successful and supportive of one another.”