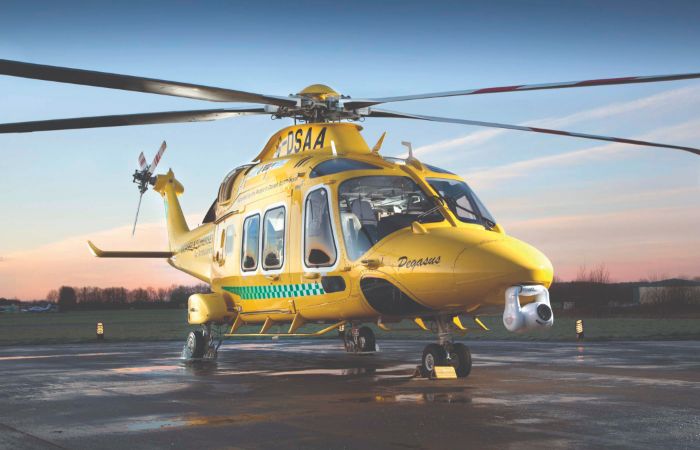 The air ambulance community is known for its agility and innovation, its willingness to take a problem and solve it. By now, the problem is well known: employees of blue light servicesare some of the greatest at risk of experiencing a range of mental health issues.

For too long, mental illness had been an issue rarely aired, let alone tackled but, true to form, the Helicopter Emergency Medical Service (HEMS) has responded with determination, vigour and creativity. There is still a long way to go but the sector is innovating around how it tackles the issues in its unique environment.

Clinicians from East Anglian Air Ambulance (EAAA) were among staff who met app developers from mental wellbeing platform 87% to help them understand the unique areas of challenge to HEMS staff. 87% – so called because of a survey that revealed only 13% of adults reported living with high levels of good mental health – is designed to empower users to take charge of their own mental wellbeing.

Development of a custom app has been overseen by psychologists responding to the latest research in the field. The result is a HEMS-specific version of 87% that is constantly evolving in response to a fastmoving sector, using feedback and anonymous data from users in its initial operation.

Victor Inyang, Medical Director of EAAA, has been using 87%, commenting, “It’s excellent for benchmarking where you are and pointing out potential red flags, amber warnings and so on, along with ways to address emerging issues. Using it brought a couple of surprises for me, especially around the issue of not switching off from work, which lots of us are guilty of. I had been aware of it but not realised the extent to which it impacted my private life. So, I made a change to separate my home and work phone and email, which has really given me permission to switch off and find some breathing space.”

Sarah Atkins, Head of HR at EAAA, adds, “There just isn’t a wellbeing tracker like this, with such a broad overview, in our sector.”

Working with Air Ambulances UK (AAUK), the national organisation that represents and supports the lifesaving work of UK air ambulance charities, 87% has rolled this out more widely in the air ambulance community. This has given HEMS staff a means of quietly exploring how they’re doing, safe in the knowledge that data remains anonymous to their employer.

Recommendations are based entirely on the individual involved, with suggested reading material, videos to watch, exercises to try and people to talk to. Importantly, the app doesn’t try and diagnose mental illness, it simply points users to interventions most likely to improve their wellbeing, allowing users to focus on strengths, rather than deficits, and harness those strengths to keep themselves well.

87% also offers businesses a brand-new approach to managing and improving wellbeing in the workplace, through data-driven analytics. Measurable data drives insights that give companies the tools to support their employees in the right way at the right time.

Dr Serra Pitts, Clinical Director of 87%, explains: “Our aim is to help people measure, understand and improve their mental wellbeing and in doing so we hope to prevent serious mental health problems from happening, rather than addressing them once they’ve already become an issue. We believe the crucial part of this process is self-awareness. Only by being self-aware can you assess how you are and spot the signs of when you’re struggling. Resilience is born of self-awareness and good relationships, so this is the focus of 87%.”

More information can be found on 87%’s work at: www.87percent.co.uk/our-work

How To Help Staff With ‘Return To Work Anxiety’

Medivet appoints 87% to measure, understand and improve the mental wellbeing of 3,000 colleagues

How Financial Worries Are Having A Negative Impact On Mental Health

WHY BUSINESSES SHOULD SUPPORT COVID SUFFERERS RETURNING TO WORK