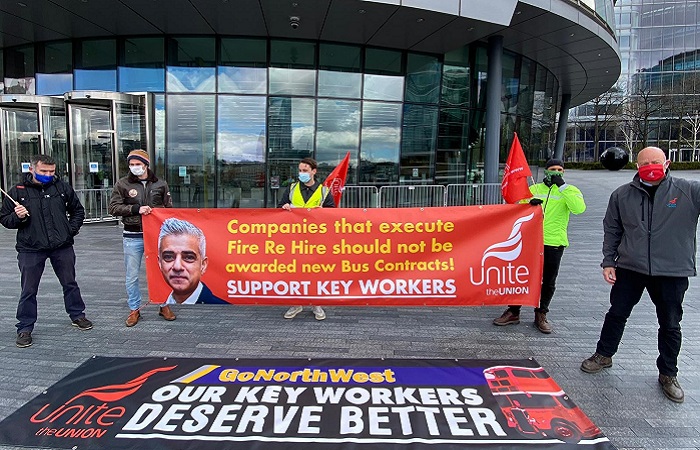 The union Unite is calling on the mayors of London and Greater Manchester to outlaw ‘fire and rehire’ practices on bus services.

The call was delivered to the offices of Greater Manchester Mayor Andy Burnham and the Mayor of London, Sadiq Khan last week (15 April).

The move comes in the same week British Gas was condemned by unions for its fire and rehire tactics which saw almost 500 of its employees sacked after refusing to sign the company’s new contracts which will force them to work more hours and cut average pay.

Unite is accusing the Go Ahead Group, which runs bus services in Manchester and London, of using fire and rehire tactics to undermine Manchester bus drivers’ pay and conditions and is warning that other bus workers could face a similar fate unless the London and Manchester Mayors take action.

Both mayors have the power to outlaw fire and rehire by barring employers which use this strategy from bidding for bus contracts controlled by Transport for London and Transport for Greater Manchester.

The call comes as over 400 drivers in Manchester employed by Go Ahead subsidiary Go North West continue their strike, which began on 28 February.

Unite said that Go North West’s fire and rehire plans mean bus drivers will be forced to work longer hours for no additional pay. It claims Go North West is expecting its drivers to undertake 130 hours of unpaid work per annum, resulting in drivers being £2,500 a year worse off, and is changing its existing sick pay policy, which will result in a 67% cut in sick pay for workers with over five years’ service.

Unite executive officer, Sharon Graham, said: “We are calling on Andy Burnham and Sadiq Khan to publicly back a declaration which bars employers who use fire and rehire from bidding for future contracts in the great cities of London and Manchester. Warm words in support of the bus drivers in Manchester who are under attack are simply not enough and workers in London could be next. It’s time to act.

“It’s obviously wrong for [organisations] to sack workers and then re-hire them on inferior terms and conditions. Workers need more than words of sympathy. While the government drags its heels, the Labour mayors of Manchester and London must lead the way by using their powers to outlaw fire and rehire on their watch.”

Go Ahead refuted Unite’s claims this week. The organisation said Go North West was losing nearly £2 million a year due to what it described as “outdated work practices” and said the plans included no job cuts, guaranteed pay increases this year and next, and a £1,500 lump sum for drivers.