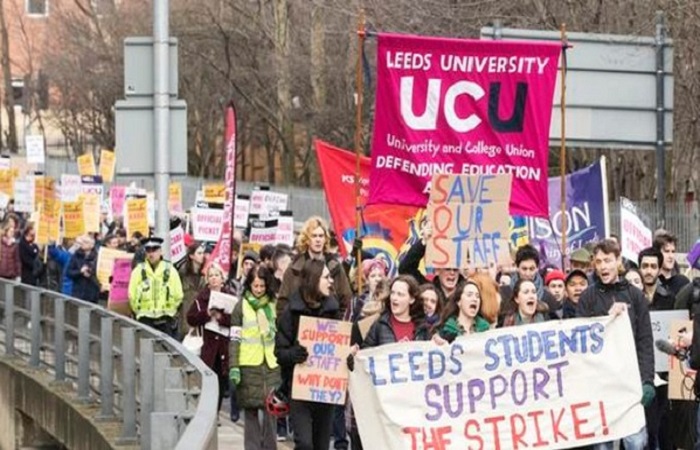 Staff at 74 UK universities are today (20 February 2020) commencing a programme of strike action that will span 14 days in total, in an ongoing dispute over pensions, pay and working conditions.

Employees from 60 universities, who are also members of University College Union (UCU), previously went on strike due to this dispute during November 2019; since that point, 14 more branches have reached the ballot turnout threshold required by law for them to take industrial action.

This wave of strikes will take place on 20 and 21 Fevbruary, 24 to 26 February, 2 to 5 March and 9 to 13 March. On Wednesday 19 February 2020, the National Union of Students (NUS) confirmed its support for UCU members’ decision to take continued industrial action.

UCU claims that pension disagreements, a rise to costs and a decrease in benefits has left the average university employee £240,000 worse off in total. In addition to this, UCU found in October 2019 that pay for university staff has dropped significantly, giving them ground to initiate a strike.

Claire Sosienski Smith, vice-president at NUS, said: “Government reforms have forced higher education providers to fight each other in a ‘market’ built on student fees rather than providing accessible, life-long, fully-funded learning, and teaching staff are bearing the brunt of it. As long as our education remains a market, these situations will continue, with more and more students feeling aggrieved.

“Students and employees are the ones paying a personal price here; the people in charge of the situation, our institutions and their vice chancellors, must work harder to resolve these disputes.”

Jo Grady, general secretary at UCU, added: “We have been receiving news of solid support for the strikes across the UK. That support sends a clear message to universities that, instead of focusing on silly games and spinning in the run up the walkouts, they should have been working with us to try and sort things out.

“We have been clear that we are always ready to seriously discuss all the issues at the heart of the disputes. Students are understandably unimpressed at the intransigence of their university leaders and have made clear demands today that vice chancellors and principals work harder to try and resolve the disputes.”

In an open letter to staff impacted by the disputes, the Universities and Colleges Employers Association (UCEA) commented: “All higher education employers want to provide excellent working environments where everyone is valued. The recent proposals presented to all five trade unions (UCU, Unison, Unite, GMB, EIS) in the national pay bargaining arrangements set out a series of expectations of higher education institutions around these three topics, while acknowledging that much is already happening in institutions and in the dialogue with staff representatives. Taken together they provide a real springboard for staff and trade unions to engage in their institutions on the issues of highest priority to them.

“But this progress risks being stalled if further strike action on the pay dispute is pursued in what is still only a minority of the institutions involved. This has arisen from unions having decided to pursue institutional-specific ballots on national disputes; the consequence in the pay dispute is that there are strike mandates in 70 of the 147 higher education institutions that participated in the 2019 pay round.

“We believe the modified offer can provide for a positive conclusion of the 2019–20 [New Joint Negotiating Committee for Higher Education Staff (JNCHES)] round, thus enabling a constructive engagement by both employers and trade unions in the 2020–21 round, due to commence in March.”

A UCEA spokesperson added: “Universities are deeply disappointed to see UCU trying to press ahead with [the] plans for extensive strike action. UCEA has offered UCU further informal talks and urges the union’s leaders to reconsider pursuing damaging strike action at less than half of universities, damaging students, staff and their own members, who are yet to be consulted over the new positive proposals that are on the table. These proposals address the important issues around employment in universities, focusing on casual employment, workload, mental health and gender pay gaps [and] ethnicity pay.

“These proposals followed exhaustive, but always constructive, dialogue with UCU over the last two months and with the other trade unions over the past year. UCEA has listened carefully and engaged with all 147 of the 2019-20 participating universities in developing a raft of statements and actions. We have sought to reflect the importance of these employment issues to employees, trade unions and universities alike.”