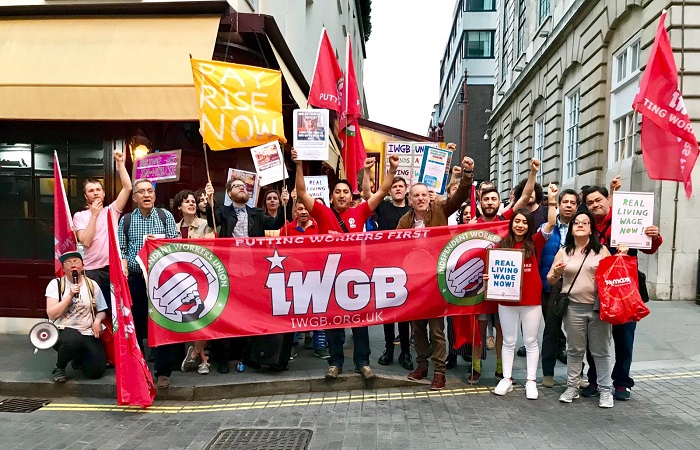 The employees, all of whom are migrant workers and are represented by the Independent Workers Union of Great Britain (IWGB), are asking to be paid the London living wage of £10.55 an hour, which is calculated independently to reflect the higher cost of living in the capital. They are also calling for proper occupational sick pay entitlements.

The exclusive Mayfair club is owned by Robin Birley, who is best known for donating £20,000 to Prime Minister Boris Johnson’s leadership campaign and £250,000 to the UK Independence Party (UKIP), and its directors are top financiers Ben Goldsmith and James Adam Reuben, and chief executive officer Clive Stuart Richardson.

The 5 Hertford Street employees in question are currently paid £9.50 per hour and only receive the statutory sick pay (SSP) of no pay for the first three days they are unable to work, and £94.25 per week thereafter.

Following a campaign by the union in May 2019, the employees received a 35p hourly pay rise, bringing their hourly pay rate up from £8.65 per hour to £9 per hour, which was reflected in their June 2019 pay packet; this rose again by 50p to £9.50 per hour in November 2019. However, as this is £1.05 per hour lower than the London living wage, the IWGB is trying to secure a higher hourly rate for the kitchen porters.

The union also made the organisation reverse a decision to outsource staff to facilities management organisation Act Clean; the kitchen porters briefly worked for Act Clean between June and September 2019.

In light of a potential strike, IWGB has also set up an appeal to raise money for the employees who will be meeting in the coming days to discuss dates.

Henry Chango Lopez, president at IWGB, said: “By voting overwhelmingly in favour of strike action, the kitchen porters have sent a clear message that they will no longer be treated like the dirty dishes they clean.

“The club can more than afford to pay these workers the London living wage and proper sick pay. If Robin Birley refuses these completely reasonable demands, he will be forced to serve his meals on dirty dishes because those that clean them are out on strike.”

5 Hertford Street was unavailable for comment at the time of publication.